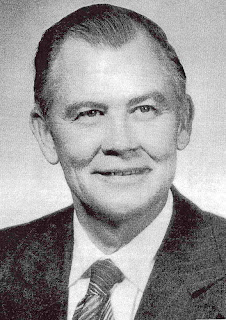 Robert Emmett McDowell was the eldest of two children, the only son of Robert Chester McDowell (1886-1971) and [] Lucile Furnas (1884-1965). His sister was Sara Jean McDowell (1917-1994).  Their mother, Lucile Furnas, was the first cousin of Wilna Ensley (1884-1971), the mother of writer Evangeline Ensley (1907-1996), who wrote as “Evangeline Walton”. Thus Robert Emmett McDowell and Evangeline Ensley, sharing the same great-grandparents,  were second cousins.  They certainly knew one another’s writings, for the older members of their families kept in close contact, and in a letter from 1978 Walton named McDowell an example of another writer in her extended family.

McDowell is remembered primarily as a historian, but he got his start writing for the pulp magazines.  Though born in , his family shortly thereafter removed to , where the McDowell family had strong ancestral ties. McDowell remained based in for the rest of his life.  He was educated at the Du Pont Manual High School and attended the for 1935-36. On August 31, 1940, he married Audrey Adams (1919-2004), who worked for many years with the Talking Book Department of the American Printing House for the Blind, before becoming a copywriter for advertising agencies. They had one son, Robert Emmett McDowell, Jr.

McDowell served in the Merchant Marines during World War II, visiting much of Europe and northern in the process. It was late in the war that McDowell started writing.  His first story was bylined with his full name, but after that, and throughout the 1940s and 1950s, he signed his work “Emmett McDowell”, returning to the use of his full name in the 1960s.

Between 1945 and 1954 McDowell published just under forty stories and novelettes in the pulp magazines.  The first was a science fiction tale, “The Happy Castaways”, in the Spring 1945 issue of Planet Stories, McDowell’s most fruitful venue.  Ten further stories would appear in this magazine through 1950.  McDowell sold three stories to Amazing Stories, at least one (“The Wandering Egos” April 1948) to editor Ray Palmer, with one to his successor Howard Browne (“What Price Gloria?” July 1951), and one (“Hereafter” April 1950) that appeared in an interim issue that could have been bought by either editor. Another tale appeared in Startling Stories (“Realities Unlimited, July 1948), and McDowell also sold a single story to John W. Campbell at Astounding Science Fiction, “” in the January 1946 issue. (This is one of the few McDowell stories to have been reprinted—Groff Conklin used it in his 1955 anthology Science Fiction Adventures in Mutation.)

Of his writing career, McDowell wrote in a profile in Planet Stories (Spring 1948): “I like to write.  I haven’t any axe to grind, unless it’s about people who think a story should fulfill some purpose other than entertainment. ‘Didn’t you enjoy it?’ That should be the final criterion. I’d like to be able to write stories that you couldn’t put down and that you regretted coming to an end.”

McDowell’s versatility is shown by his contributions to other genre magazines, like Jungle Stories (adventure tales set in ), Frontier Stories (westerns), and Action Stories (action adventures).  Jungle Stories was McDowell’s second-most prolific outlet—he published seven stories in the magazine between 1946 and 1949.  Jungle Stories, Frontier Stories, Action Stories, as well as Planet Stories, were all owned by one publishing firm, Fiction House, so it seems likely that McDowell benefited from good relations with some in-house editor, for more than half of his pulp stories appeared in Fiction House magazines.

In 1949 McDowell broke into Adventure, then still one of the most prestigious pulp magazines, with two stories (“Master Thee ad’ Thou” October 1949; and “Cave-Inn Rock” July 1950). Also in 1949, he began to shift over to the writing of detective fiction, with two stories in Detective Tales (“Charge Off the Body!” May 1949; and “Somebody Killed My Gal!” September 1949).  Others mysteries appeared in Popular Detective (“Dames Have Two”, July 1952) and McDowell’s final two pulps stories were in Triple Detective (“All She Wants Is Money” Summer 1953; and “The Tattooed Nude” Winter 1954).

McDowell turned to mass-market publishing in the mid-1950s, as the pulp magazines were dying out.  His first book, Switcheroo (New York: Ace Books, 1954), was one half of an Ace Double (D51), with Lawrence Treat’s  Over the Edge the corresponding other half of the paperback.  McDowell authored both halves of his other Ace Doubles (D-329 and D-445):  Three for the Gallows / Stamped for Death (New York:  Ace Books, 1958), and Bloodline to Murder / In the Kill (New York: Ace Books, 1960).  All of these are detective stories, and several have the recurring character Jonathan Knox, besides being set in .

In the 1950s McDowell became increasing interested in history, particularly that of the area. He joined The Filson Club in May 1956, and was a devoted member for the rest of his life.  The Filson Club—now called The Filson Historical Society—was founded in 1884 and works to preserve the history, tradition and culture of and the valley.

McDowell’s first hardcover book (and from here on he mostly used as byline his full-name) was the historical adventure novel Tidewater Sprig (New York:  Crown, 1961), which is set in the pioneer days in Kentucky when the salt found locally in licks (particularly Bullett Lick to the south of Louisville) was a vital and valuable resource for the preservation of food.  His next book, City of (Louisville: Louisville Civil War Round Table, 1962), is a nonfiction study of during the Civil War. McDowell’s play, “Home Is the Hunter”, about the establishment of the first permanent settlement in Kentucky in 1774 at Harrod’s Town, was performed each summer in modern Harrodsburg from 1963-65, and it proved popular. A historical novel about Daniel Boone, Portrait of a Victim (New York:  Avalon Books, 1964), also appeared at this time.  He contributed numerous article on historical subjects to The Louisville Courier-Journal Magazine, The Louisville Magazine, and The Filson Club History Quarterly.

McDowell returned to the mystery genre with The Hound’s Tooth (New York:  William Morrow / M. S. Mill, 1965), as by Robert McDowell, with what was to be the first of a series centering on Floyd Bowman, a deputy in the Kentucky State Police.  Though McDowell was reported to be working on a follow-up titled The Sour Mash, it never appeared.  His final book was a guidebook, Re-discovering Kentucky: A Guide for Modern-Day Explorers (Frankfort, KY: Kentucky Department of Parks, 1971). In 1971 McDowell became the editor of publications at The Filson Club, a position he held until his death four years later, less than one week short of his sixty-first birthday. He was buried in , . His widow, in her retirement, worked as an archivist at The Filson Club, where the bulk of McDowell’s papers are now housed.

Update, 26 August 2016:  McDowell's science fiction story "The Great Green Blight" has just been reprinted in Pulp Adventures #22 (Summer 2016).  Check it out here at Amazon.
Posted by Douglas A. Anderson at 5:47 PM