Alexander Ernest Urquhart settled in Cardiff in 1932, and remained there the rest of his long life.  Earlier he had done some writing for the Boys Annuals published in the 1920s by Oxford University Press.  Initially, Urquhart had been given plots to write out by the prolific Walter C. Rhoades (1860-1927), with the stories appearing under Rhoades's name;  but a small number of stories were published under Urquhart's own name in The Oxford Annual for Boys: 20th Year (1927) and The Oxford Annual for Boys: 21st Year (1928), and The Great Book for Boys (1930), all edited by Herbert Strang. After moving to Cardiff, Urquhart met and became a close friend of the great Welsh fantasist and theosophist, Kenneth Morris (1879-1937).  He was Morris's literary executor and saw to the preservation of Morris's manuscripts, like the novel The Chalchiuhite Dragon (finished 1935, published 1992). In his later years he assisted scholars working on Morris, and Urquhart was one of the two dedicatees of The Dragon Path: Collected Tales of Kenneth Morris (1995).
Posted by Douglas A. Anderson at 5:33 PM No comments:

"Stanley Hopkins Jr." was a pen-name used by Blythe Morley, the daughter of the novelist and critic Christopher Morley (1890-1957), one of the founding editors of The Saturday Review of Literature, and his wife Helen Booth Fairchild (1894-1966). Blythe Morley was their third daughter (of four children), and was raised in Roslyn, on Long Island.  She was educated at Vassar.  Her first novel was a mystery, Murder by Inches (New York: Harcourt, Brace and Company, [1943]), as by Stanley Hopkins Jr.  The dust-wrapper blurb is quite entertaining: 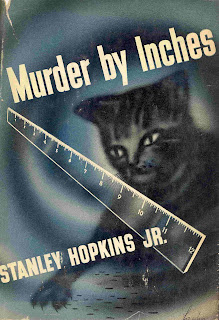 This first detective story by a new author has the liveliness and gaiety of youth. The scene is on Long Island near a defense plant. Clues are many and curious, and the plot is contrived with unusual care. Why do the cats of the neighborhood disappear? What does the ruler with divisions of thirty-seconds of an inch mean? Who is the secret visitor Ed Sharp entertained the night he was murdered? This is the kind of story one looks back from the end with complete satisfaction. Good in plot, it is even better in its characters. As Stanley Hopkins himself remarks, the only completely fictitious character in this novel is the author.


The pen-name derives from a minor character in the Sherlock Holmes stories--where Stanley Hopkins is a young Scotland Yard inspector who admires Holmes's detective techniques even if he finds it difficult to apply them to his own work.  Blythe Morley's father was a well-known devotee of Sherlock Holmes, and in 1934 he had founded the Baker Street Irregulars, a fan club for Sherlock Holmes enthusiasts that continues to the present. Murder by Inches was well-reviewed--not a bad reception for the twenty-year-old author.  A further volume soon appeared, The Parchment Key (New York:  Harcourt Brace and Company, [1944]), also by Stanley Hopkins Jr.  And a final short story, "The Lady Holding a Green Apple", appeared under that pseudonym in the February 1947 issue of Ellery Queen's Mystery Magazine.

Blythe Morley's two subsequent novels were published under her own name, The Intemperate Season (New York: Farrar, Straus and Company, 1948) and A Campaign in Time (London: Eyre & Spottiswoode, 1952), after which she ceased publishing.  She married James Brennan, and died in New Mexico at the age of 79.
Posted by Douglas A. Anderson at 3:53 PM No comments: 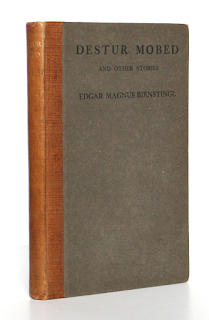 Edgar Magnus Birnstingl was the youngest of three sons of Avigdor Lewis Birnstingl (1853-1924), a stock broker, and Cordelia (1865-1917), née Pyke, who were married in 1888. He grew up in Kensington, and entered St. Paul’s School in 1911.  After his death at the age of sixteen, some of the stories he had written in the previous two years were collected and privately issued as Destur Mobed and Other Stories ([Oxford]: Printed for Private Circulation, 1915). This slim volume contains fifteen stories and an appendix, a photographic portrait of the author as frontispiece, and a “Prefatory Note” signed “E.L.” [Elizabeth Lee].  Some of the stories are mere sketches, others are somewhat longer.  Many concern the author’s fascination with gemstones.  The “Destur Mobed” (translated as “Complete Master”) of the title story concerns a Babylonian brass statuette of a lion, which grants wishes along with curiously twisted side effects so that the ill-effects dwarf any good fortune. (A second story, “The Case of Galstone’s Eyes,” also concerns the Destur Mobed.)  The stories, mostly all imaginative fantasies dealing “with the marvellous, the mysterious, the unusual” (to quote the preface writer), are well-done and worth reading, bringing on the inevitable regret that the young writer didn’t live a long productive life.  The volume earned (and deserved) the trade edition of one thousand copies, published by Elkin Mathews in December 1916.

NB: An earlier version of this entry appeared in my column "Late Reviews" in Wormwood, no. 1 (November 2003).
Posted by Douglas A. Anderson at 3:14 PM No comments: