Harold Edwin Boulton was the elder son of Sir Samuel Bagster Boulton (1830-1918), the founder and chairman of the London Labour Conciliation Board whose baronetcy was created in 1905, and Sophia Louisa Cooper (1837-1900).  He had four sisters and one brother.  He was educated at Harrow, and at Balliol College, Oxford (B.A. 1881), where he was devoted to music, for some time leading the school choir.  On leaving Oxford, he joined the family firm of Burt, Boulton and Haywood, which owned timber, railway and chemical businesses.

On 20 January 1889 he married Adelaide Lucy Davidson (1863-1926), and they had two sons (one of whom died in the Great War) and one daughter.  In 1903 he founded with his father the Dominion Tar Chemical Company in Nova Scotia, and visited Canada frequently. He succeeded to the Baronetcy on his father’s death in 1918. After his first wife’s death, he married on 26 December 1926 Margaret Cunningham Lyons (1860-1938), the widow of Robert Charles Simpson Moodie of Montreal.  Boulton was very active in business and artistic interests, particularly song-writing, as well as philanthropy. 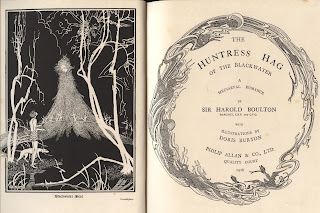 He edited or co-edited Songs of the North: Gathered Together from the Highlands and Lowlands of Scotland (four volumes, 1880s?), Songs of the Four Nations: A Collection of Old Songs of the People of England, Scotland, Ireland and Wales (1892) and Our National Songs (three volumes,1923-31). He wrote Songs Sung and Unsung (1894), and several other slim booklets and collections. The Huntress Hag of Blackwater: A Mediaeval Romance (London: Philip Allan, 1926) is a narrative poem of romantic supernaturalism, with macabre illustrations by Doris Burton. 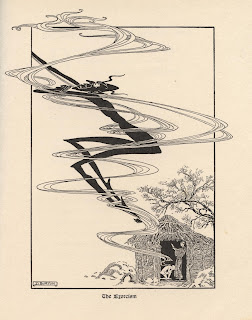 Posted by Douglas A. Anderson at 1:30 AM No comments: