**Update 3/3/18: A special thanks to Alex Falcone for sharing information about Cullen which he got from Cullen's friend Herbie Brennan, and with which I'm able to update this entry.**

“Seamus Cullen” was a pseudonym for an American, long resident in Ireland. His real name was James Serwer; he was known familiarly as Jim. He was the son of Harry Serwer (1891-1962), who worked in advertising.  Little is known about his life.

Cullen’s birth-year appeared in Library of Congress cataloguing information as 1927, but this is erroneous (the correct year being 1921). The dust-wrapper blurb for his first (mainstream) novel, Walk Away Slowly (1970), which is described by the publisher as “a novel about an obsessive love,” divulges more details about his life than perhaps any other published source.  It reads:

Seamus Cullen, onetime photographer and classical guitar player, spent his early childhood mostly in New York City and the west of Ireland. Now he seems settled in Dublin, but travels constantly as a marketing and management consultant to business firms all over Europe. After the war he did a stint for the Civil Air Patrol in the United States Naval Air Service and professes to “still find flying fun, skiing, water skiing, just being in the country.” He is also “rather busy bringing up a twelve-year-old daughter single-handedly. Married twice and extremely cautious.”

Cullen is best-known for the second of his four novels, the bizarrely twisted and erotic Astra and Flondrix (London: Allen Lane, 1976; New York: Pantheon Books, [1977]), in which the naïve Flondrix, the offspring of a sexual transgression between the mortal Dark King and an Elvan princess, journeys around in a world where every orifice is open to every form of eccentric genitalia, in terms of shape, size, color, etc. The plot itself is minimal, and the unending sexual escapades are the basis for the narrative’s forward movement. According to fellow fantasist Herbie Brennan (whom Cullen came to know in Ireland), the manuscript was originally titled Enter Prefix, and while Cullen was apparently somewhat insecure about the book, Brennan loved it and encouraged him to send it out for publication.  After a few refusals, it was accepted by Allen Lane, and renamed (at the publisher's behest) Astra and Flondrix. It was modestly successful, and was translated into Danish, Dutch and Swedish.

Cullen wrote a sequel, which Brennan thinks was titled The Beast Beneath, but the editors at Allen Lane responsible for accepting and publishing Astra and Flondrix had left the firm, and the book was declined.

Cullen also published in England two Arabian-styled fantasies, A Noose of Light (1986) and The Sultan’s Turret (1986); they have had no U.S. editions. An extensively revised episode from the second of these novels appeared in Mike Ashley’s The Mammoth Book of Seriously Comic Fantasy (1999; US title, The Mammoth Book of Comic Fantasy II), following an Arthurian tale, “Meraugis and Medwina,” which had appeared in Ashley’s The Chronicles of the Round Table (1997).

In May 2006, a query from Mike Ashley to Cullen was returned and marked “deceased.”  A further query with the post office in Kilmacanogue, where Cullen lived just to the south of Dublin, revealed that Cullen had been very ill with cancer, and had moved to a neighboring village the year before. According to Herbie Brennan, Cullen died of brain cancer, not long after his eighty-fourth birthday. 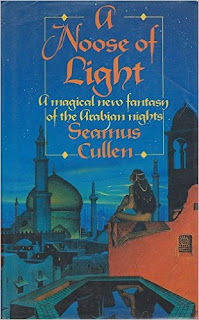 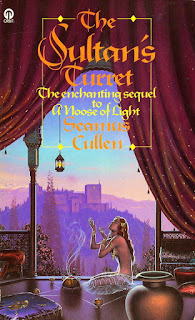 Posted by Douglas A. Anderson at 12:15 AM No comments:

Leslie Holdsworth Allen was the son of the Reverend William Allen (1847-1919) and his wife Martha Jane Holdsworth.  William Allen had been born in England but immigrated to Australia with his family when young, later becoming well-known as Congregational Minister of Melbourne and Petersham, N.S.W. Leslie was the second of five or six children, and was educated at Newington College, Sydney, Sydney University (B.A. 1904), and Leipzig University (Ph.D. 1907). He spent most of his life in Australian academia, at the Royal Military College at Duntroon from 1918 to 1930, and at Canberra University College (now the Australian National University) from 1931 on. He married Dora Bain (1880-1932) in Chatswood on 22 December 1915. They had two children, one daughter, and one son who died young.

His first book was Gods and Wood-Things (Sydney: Angus & Robertson, 1913), which is a collection of seven poems and seven Hellenistic vignettes of fauns, centaurs and naiads. He translated two of Friedrich Hebbel’s Three Plays (1914) for the Everyman’s Library. Further poems were collected in Phaedra and Other Poems (London, 1921), Araby and Other Poems (Sydney, 1924) and Patria (Melbourne, 1941).

Posted by Douglas A. Anderson at 5:31 AM No comments: