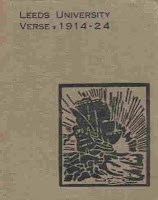 In 1921 Matthewman began to produce booklets of poetry out of his father’s printing business in , calling his imprint The Swan Press. His first book was a small pamphlet of his own poems, together with a verse dialogue, entitled The Gardens of Meditation (1921). Within a few years he proceeded on to more substantial works by friends and others with whom he had come into contact at .  Besides publishing his own writings (all as “S. Matthewman”), the Swan Press also published collections by Catholic poet and Leeds professor Wilfred Rowland Childe (1890-1952), and anthologies like A Northern Venture: Verses by Members of the Leeds University English School Association (1923) and Leeds University Verse: 1914-1924 (1924), which include poems by J.R.R. Tolkien, then also on the faculty at Leeds. Many of the Swan Press books were published in small editions. The first printing of A Northern Venture, published in June 1923, was a mere 170 copies, and the reprint in July was of another 200 copies. This title was an exception, for most of the Swan Press booklets were not reprinted at all.

Most of Matthewman’s own small books were published between 1921 and 1930.  These include poetry, The Lute of Darkness (1922), Two Poems of the Road (1924), Six Epigrams (1924), The Harlequin (1925), Poems 1927 (1927), Orchard Idyll (1927), Strange Garden (1928), Epithalamion: An Ode (1929); a small essay collection, Sketches in Sunshine (1926); and a few prose fantasies, The Crystal Casket (1924), and The Vision of Richard concerning the Chapel of the Sword and the Rose (1926). The Crystal Casket is a short original fairy tale of merit. A third prose fantasy is How Brother Theodosius Beheld a Vision: A Little Tale of the Springtime (1928), printed privately in an edition of fifty-seven copies. In an entry for a writer’s directory, Matthewman listed a few further titles that cannot presently be verified, including Interlude (1929), as well as some planned translations: Plum Blossom and Nightingale from the Japanese, The Rubai yat of Sarmad (with B. Ahmed Kashmi), and The Complete Poems of Meleager. None of these seem to have been been published.  For High House Press in Shaftesbury, Matthewman translated Hylas: The XIIIth Idyll of Theokritos (1929), and wrote The High House Press: A Short History and an Appreciation (1930). Four Country Poems (1932) came out from Red Lion Press in an edition of fifty copies. Many of Matthewman’s books have decorations by Albert Wainwright (1898-1943).

Matthewman served as secretary to various scientific societies, and joined the Leeds Civic Playhouse in 1927.  He played the part of Hannan in the first British production of The Dybbuk by S. Ansky (1863-1920). Matthewman married Phyllis Barton (1896-1979) on 22 February 1930.  They had no children and moved around frequently, and sometime in the 1930s had some sort of breakdown.  Phyllis Matthewman took up writing with Chloe Takes Control (1940), published by the Girls Own Paper Office in .  Over the next three decades, she would publish over seventy books, most of them novels, many of them published by Mills & Boon. In the mid-1940s she published two novels under the pseudonym Kathryn Surrey. Her final books appeared in 1974.

In 1944, Sydney and Phyllis took temporary refuge from the bombings around their home in Surrey by removing to , where they became close friends of the writer Elinor Brent-Dyer (1894-1969), author of the popular “” series for girls.  Phyllis and Brent-Dyer had known each other as children, but hadn’t been especially close.

In 1946, after a long hiatus, published two small books of poetry, Gabriel’s Hounds, a tale in verse, and Christmas Poems. He also served as editor for The Bookmart in 1946-47.


*Thanks to Michael Green for the scan of the photograph of Matthewman, the frontispiece to Poems (19 27)
Posted by Douglas A. Anderson at 4:00 AM 7 comments: