Charlotte Bryson Taylor was the daughter of John Yeatman Taylor (1829-1911) and Sabella Barr Bryson (1846-1919).  She had a younger brother Andrew Bryson Taylor (1883-1909).  Her father had been medical director of the United States Navy, and retired in 1891 with the rank of Rear Admiral.  was educated at private schools in the and in .  Her first story appeared in The Overland Monthly in 1898, and by 1900 her newspaper and magazine work had become regular. She always signed her work “C. Bryson Taylor”, presumably to disguise her gender. Based out of Washington D.C., and later out of New York, she published over the span of about a decade numerous stories and articles in popular magazines, most notably in Everybody’s Magazine, but also in Munsey’s Magazine, All-Story Magazine, The Cosmopolitan Magazine and The Delineator.

Taylor’s first novel was In the Dwellings of the Wilderness (New York:  Henry Holt, 1904), a short fantasy in which archeologists Deane and Merritt and their men unearth the mummy of a high ranking woman from its sealed tomb in Egypt. The evidence suggests that she was walled-in while alive, behind a door marked “forbidden”, in order to trap the devil soul that possessed her.  The next morning the mummy has disappeared—soon afterwards a beautiful woman tries to lure some of the men into the desert. Those who follow her are never seen again. The leader Deane gets lost searching for one of his men, and is attacked by something which bites his shoulder, attempting to suck his blood.  Deane escapes, but the next day he and the expedition leave the desert to its secrets.  This short novel, published in April 1904, is well-written and evocative, an understated but atmospheric tale perhaps influenced by Bram Stoker’s The Jewel of Seven Stars, published in England in June 1903.
’s second novel, Nicanor: Teller of Tales (Chicago: A.C. McClurg, 1906), was illustrated by and Margaret West Kinney, and it is a more ambitious enterprise, if a less lasting one. Set in during the Roman occupation, it tells of Nicanor, the son of a peasant. Nicanor becomes enraptured by the story of the Christ-child, and in retelling it becomes a captivating storyteller himself.  The book was well received at the time of its publication. 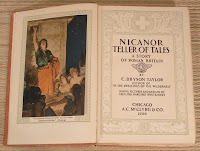 ’s brother was killed in an automobile accident in 1909. In 1911, her father, after some years of declining health, shot himself in the head.  ’s published output ceased, and for a while she worked on the staff of Everybody’s Magazine, to which she had been a regular contributor. married Anderson Oakes Randall (c. 1882-1917) in November 1912.  After her husband’s death in in May 1917, she disappeared from public life, and died in early June 1936. She was buried in the family plot near her husband and mother in in on June 13, 1936.

NB: An earlier version of this entry appeared in my column “Notes on Neglected Fantasists”, Fastitocalon no. 2 (2010).

Posted by Douglas A. Anderson at 9:00 AM