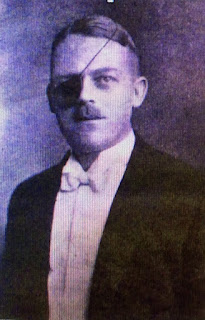 Alan Charles Griffiths was the second of four surviving children of Charles Herbert Griffiths (1874-1950), a commercial traveler in engineering, and his wife Kate Elizabeth Thompson (1872-1960), who were married in Bury St. Edmunds in the spring of 1897.His older sister was Gertrude Kate Griffiths (1898-1982), and his younger brothers were Leslie Neil Griffiths (1905-2006) and Geoffrey Norman Griffiths (1907-1989).

Alan Griffiths published four novels in England, all humorous fantasies after the manner of Thorne Smith, the first two of which achieved American editions.  Griffiths supplied some biographical information for the blurb on the rear flap of the first American publication, and as information on Griffiths is rare, it is worth quoting this sardonic piece in full


Alan Griffiths, whose hilarious explorations bring startling news from Heaven, has himself led a quiet if somewhat incongruous life. He began as an apprentice in an iron foundry and put into every casting all the loathing of which his soul was capable.

At seventeen he went to war in the hope of seeing something of the world. As a result of Ypres he has seen it though one eye ever since.

Later he spent three years in an Indian woolen mill advertising underwear to natives who had no inclination to wear it.

Returning to England he wrote limericks for a patent cheese and got a very temporary job as a postman.

This first novel was Strange News from Heaven (London: Lovat Dickson, 1934; Garden City, New York: Doubleday, Doran & Company, 1935). In it a reverend suffers a stroke and is pronounced dead. But he suddenly returns to life with strange tales of his visit to heaven. It received mixed reviews. While the New York Times called it a "delightfully impudent extravaganza" (21 July 1935), the Boston Transcript complained "not only is the news from heaven strange but it turns out to be rather dreary" (27 July 1935).

Griffith's second novel was Spirits Under Proof (London: T. Werner Laurie, 1935), retitled Authors in Paradise (New York:  Frederick A. Stokes, 1939) for its U.S. edition. Here an illiterate cockney publishes a novel The Return of Gulliver, supposedly dictated to him from the spirit world by Jonathan Swift.  Its notices were slightly better:  "The story is a little slow to start, and there is too much of it. But it is extremely bright" wrote Olga Owens in the Boston Transcript (19 August 1939). Beatrice Sherman in the New York Times noted: "Much of the book is heartily humorous. It grows a bit tiresome when it pursues too continuously the vein of a learnedly jocose letter to The London Times"  (20 August 1939).

Griffith's third novel came from a third U.K. publisher, as did his fourth, and neither were picked up by U.S. Publishers. The Passionate Astrologer (London: Arthur Barker, 1936)  continues in the same vein, as does his final book, Of Course, Vitelli! (London: Methuen, 1938), which achieved some fame in recent years because Jorge Luis Borges reviewed it (in Spanish) favorably, if very inaccurately, soon after publication. (His review was translated into English in Selected Non-Fictions, published in 1999.) In the book a writer invents a person named Vitelli and then writes his biography, while Vitelli's reputation grows until the inevitable happens.  I have written about Borges and this book here.

With regard to attested facts in Griffiths's life, he joined the British Army in 1917, and thereafter lost his eye.  After the war, he earned a degree in Mechanical Engineering at University College, London.  Nothing is known of the last decade of his life.

John Shire is a small-press writer, publisher and photographer based in Brighton.  He began publishing stories in the small press in 1997. A collection of three stories, Undergrowth and Other Hidden Tales, was announced for publication in 2002 by Hollow Hills Publishing, and while the book achieved one review (see here), the book was apparently never published.

In 2011, Shire founded Invocations Press, and published his first book, a nonfiction volume Bookends: A Partial History of the Brighton Book Trade (2011), a fine read for anyone interested in bookselling lore in any locale. Particularly interesting is the coverage of Bill Butler's Unicorn Bookshop which ran from sometime around 1967 to 1974. Bill Butler (1934-1977) was an American beat poet who settled in Britain and frequently ran afoul with British authorities for publishing iconoclastic literature, like J.G. Ballard's Why I Want to Fuck Ronald Reagan (1968).

Shire published one of his own short stories An Antique Land (Invocations Press, 2012) as a paperback limited to 100 numbered copies. (It slightly expands Shire's story from Bound for Evil (2008), edited by Tom English.) Shire also issued a collection of ten stories (plus one nonfiction piece) Their Hand Is At Your Throats (Invocations Press, 2013), similarly as a trade paperback limited to 100 numbered copies

In the "Preface ... Stories After Lovecraft" Shire notes that "for almost thirty years I have been trapped in the orbit of a vast dead star named Lovecraft. And it's driving me mad. After any number of futile attempts at mapping its protean geography, I finally decided to put my efforts into breaking away instead. But it looks like that's never going to happen."

Six of the stories originally appeared in (mostly Lovecraftian) small press journals between 1997 and 2007, with four new stories in the collection.  Ellen Datlow noted in The Best Horror of the Year v. 6 (2014): "The new stories are surprisingly good, mostly rising above pastiche." Some of the stories, on the other hand, suffer a bit from too much postmodern playfulness.

Shire also contributed some short entries to 1001 Books You Must Read Before You Die (2006), edited by Peter Boxall, including those for Borges's Labyrinths, Hodgson's The House on the Borderland, and Lovecraft's At the Mountains of Madness.

In the about the author blurb in Their Hand Is At Your Throats it notes that he has worked "in record shops, antique shops and libraries, but prefers jobs he can make up himself, such as writer, publisher and photographer."  (Shire did the cover art for An Antique Land and Their Hand Is At Your Throats.)  A further note says "a degree in Literature and Philosophy has done him no good whatsoever." 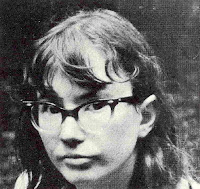 Linda studied at Loyola University in New Orleans (A.B., 1958). She married Harry Haldeman (1933-1994) on 8 August 1959.  They had two sons and two daughters. For 1959-60, Linda was an instructor in English at Columbia College of Art in Columbus, Ohio. Soon after this, Harry Haldeman became professor of English at Indiana University of Pennsylvania, and the family settled there.

Linda Haldeman suffered from Bell's Palsy all her life, and was diagnosed with cancer around 1975, for which disease she had some twelve operations before her death.  Despite her illness, she published three novels and some short stories. Her first novel was Star of the Sea (Doubleday, January 1978), a Catholic miracle story set in Mississippi in 1950, in which a young girl at convent school converses with a statue of the Holy Mother and is party to some miracles.  This was followed in November by The Lastborn of Elvinwood (New York: Doubleday, 1978; London: Souvenir Press, 1981), set in Surrey, in which Mompen, the lastborn of the firstborn and a clumsy fairy, must be swapped for a willing human bride in order to save the dwindling fairy race.

Her third and final novel was a paperback original, Esbae: A Winter's Tale (New York: Avon, December 1981). Set on a college campus, it tells of a jock who has summoned Asmodeus to keep him from flunking out and a scatterbrained classmate Sophie, who Asmodeus wants to be sacrificed. But helping Sophie is Esbae, a "spiritous creature from the Empyrean" who has been sent to Earth to redeem itself.
After the three novels, Haldeman published a novella and two short stories in Alfred Hitchcock's Mystery Magazine, and a fantasy story in Magic in Ithkar (1985), a shared world anthology edited by Andre Norton and Robert Adams.  She also contributed to Opera News and Opera Journal (Haldeman's passion for opera is evidenced in Esbae).

In a note to Contemporary Authors c. 1980 Haldeman wrote:


"I am primarily a teller of tales. This is a profession that has fallen into disfavor with many critics. It is felt, it seems, that there are two kinds of fiction written, the good story and the literary novel, and it is assumed for some reason that they are mutually exclusive. It is my intention to remarry these two ideas of the novel after a too-long forced separation. An entertaining and absorbing plot ought not to exclude good writing style and sympathetic, well-developed characters."

Fellow-writer Nancy Springer wrote a short memoir of Haldeman for Locus (April 1988), noting: "she was a strong, sometimes angry, sometimes outrageously cynical woman, with a sly sense of humor and a questing mind. In appearance she was a pixie, an innocent. Appearances were deceptive. She knew the score, and she knew how to laugh it to shame. . . . She 'cast a cold eye on life, on death,' and kept a warm heart in defiance of both. She was quite possibly the most courageous person I have ever known."
Posted by Douglas A. Anderson at 7:00 PM 4 comments: