Little is known of Edwina Catherine Geach, the daughter of Edwin Geach and his wife Catherine, nèe Greenwood.  Her slim posthumous collection, The Soul of the Ti-Tree (Melbourne: Thomas C. Lothian, 1909), is basically a memorial volume, comprising just over two dozen prose sketches and three poems. A small number of the writings were published pseudonymously during the author’s lifetime, but no details are given.

The volume contains a short introduction by the (anonymous) editor, plus a head-quote by Fiona Macleod (whose mystical tales were clearly a source of inspiration to the writer), and an odd unsigned “Foreword” which tells of a young wood-maiden, centuries ago, who was beloved by the fairies and pixies and sprites, but who “in the fulness of time” took her part as a daughter of the world, until the call of the trees for her to return became too strong for her to resist.  It ends:  “After her departure there were found certain writings, which she had made that about the world that is in the midst of the ti-tree, and about the world that is the world of men, and about the world that was in the centre of her own being.  These writings, coming from the heart of a woman, true and tender and compassionate, are now made into a book, so that they may be read by those who knew her and loved her, and by those who, loving the trees and the earth and the sea, would also have loved the maiden form the land of the ti-tree had their passed crossed hers.”  The allegory of the authoress seems to hint of suicide, as does the introductory note, which remarks of the “withdrawal” of her unique personality on Christmas morning of 1905.

The tales are mostly very short, and one wishes that some of these gossamer mystical sketches had a bit more substance and depth to them, but they don’t.  One sketch was reprinted separately as a booklet, An Elfin Land (Melbourne: Sydney J. Endacott, [1914].


Alexander (“Sandy”) Manson Kinghorn was born in London to a Scottish family.  He studied at the University of Aberdeen, and received an M.A. in 1947 for his dissertation “A Study of Literary Criticism in Scotland during the Second Half of the Eighteenth Century”. He received a Ph.D. from Pembroke College, Cambridge, in 1953. His studies had been interrupted for three years service in post-war Vienna as part of the army intelligence corps. His scholarly publications were numerous (some signed “A.M. Kinghorn”), including The Chorus of History, 1485-1558: Literary-Historical Relations in Renaissance Britain (1971), and the booklet Death and the Makars: Timor Mortis in Scottish Poetry to 1600 (1979). He also edited texts such as John Barbour’s The Bruce: A Selection (1960), and anthology of Mediaeval Drama (1968; second edition, as The Rise of English Drama to 1600, 1984), The Middle Scots Poets (1970), and Shakespeare: The Merchant of Venice (1988). With his longtime friend Alexander Law he co-edited The Works of Allan Ramsey in six volumes (1951-1974), and The Poems of Allan Ramsey and Robert Fergusson (1974). Kinghorn also contributed to many journals. His pseudonymous work includes a biography, The Life and Death of Michael X (1981), as by James Sharp, and a short book of illustrated rhymes, Jittery Goose (1975), as by Tom Piper. 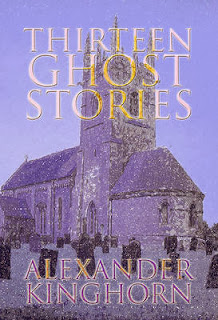 He married Marion Gurling in London on 1 September 1956.  His academic postings ranged around the world:  the University of Texas at Austin (1953-55), McGill University in Montreal (1955-57), King’s College, at Dalhousie University in Nova Scotia (1957-1960), and the University of the West Indies, Jamaica (beginning in 1960).  After some time in Denmark, Kinghorn spent the 1980s as Professor of English at the University of Qatar in the Arabian Gulf.  After his wife died in Qatar in the late 1980s, Kinghorn retired to England, and subsequently re-married, a widow Margaret Crow, in 1996.

In retirement he turned to writing ghost stories, following the example of M.R. James. These stories were published as a trade paperback original, Thirteen Ghost Stories (Bognor Regis, West Sussex: Woodfield Publishing, 2004).  In his Preface, Kinghorn notes that James “drew attention to the suggestive importance of settings” in the writing of ghost stories, and Kinghorn has followed James’s example.  Indeed, it is the details of Kinghorn’s settings that give the stories real verisimilitude, along with (again following James) a tendency for malevolent ghosts.  These are literate, atmospheric tales, which have gone mostly unnoticed by readers of the genre. Kinghorn died of cancer.
Posted by Douglas A. Anderson at 6:00 AM 2 comments:

Walter Reginald Latham, known familiarly as Reg, self-published his collaborative first book, a small gathering of poems titled Verses and Cuts (1934), as by Reg. Latham and Walter E. Spradbery.  During the early years of the Second World War, he wrote more poetry, including some translations of André Gide, as well as a cache of nonsense verse, with Violet Ethel Palmer (1906-2002), who was apparently his common-law wife.  (There is no public record of their marriage, but there is a notice in The London Gazette for 3 September 1943 that natural-born British subject Violet Ethel Palmer would henceforth use the name of Violet Ethel Latham, beginning three weeks after the publication of the notice.)

Around 1944 a bunch of the poems came into the hands of Robert Aickman, then working with his wife as literary agents. One long poem, “Liza Lottie Leopold”, was accepted by The Nineteenth Century and After, and appeared in their January 1945 issue.  A collection of eleven of the (longish) poems was published as Latham’s Nonsense Verses by Constable in September 1948. The volume had been accepted by Michael Sadleir at Constable with the understanding that they were all by Latham, but as publication neared Latham insisted that his wife should be named as co-author. From the standpoint of publicity, Constable felt they could promote one Latham as a new Edward Lear, but not a husband-and-wife team, and their interest in the book lessened. In the end, only Walter Reginald Latham’s name appears in the book, and only on the copyright page, not the title page. 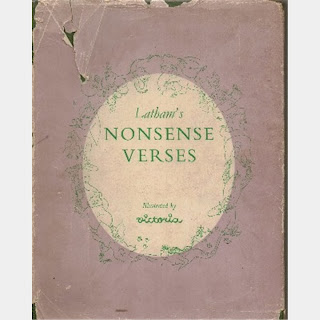 The published volume had many humorous line-drawings by “Victoria”, the working name of Victoria Davidson (1915-1999), who was born Lilli Ursula Barbara Commichau in Bavaria, and who married Erich Victor in 1935, the same year they both emigrated to England.  They were known familiarly as Victor and Victoria—hence her working name.  They separated during the Second World War, and in 1949 she married her second husband, Dr. Hans Davidson (1913-1980). Victoria’s illustrations were staples in Lilliput and The Picture Post for nearly twenty years, and appeared in many other English and German magazines.

Latham’s Nonsense Verses was not a publishing success, and though there are references to a later published book of Latham’s poems, I have not been able to confirm it.


Posted by Douglas A. Anderson at 6:00 AM No comments:

Barbara Ninde was the middle of three children of Harry Warrington Ninde, Jr. (1899-1980), who worked as the manager of a mortgage and loan company, and Elizabeth Rudisill, née Freeman (1899-1986), who were married in Fort Wayne, Indiana, on 14 November 1925.  Barbara had an older sister and a younger brother.

Barbara attended the University of Wyoming for two years, 1947-49. She married Hugh W. Byfield (1922-1984) in Chicago on 19 April 1956.  They had two daughters, but the marriage did not last long and they were divorced.  Byfield signed all of her books as by Barbara Ninde Byfield. Through the 1960s-70s she lived in New York City.

Her first book, of several self-illustrated juveniles, was The Eating in Bed Cookbook (1962), and it was followed by a series comprising The Haunted Spy (1969), The Haunted Churchbell (1971), The Haunted Ghost (1973) and The Haunted Tower (1976). An unrelated self-illustrated book was Andrew and the Alchemist (1977; retitled The Man Who Made Gold, 1980). Byfield wrote the text for Smedley Hoover, His Day (1976), based around photographs by Sara Krulwich, and four adult mystery novels appeared as Solemn High Murder (co-written with Frank L. Tedeschi, 1975), Forever Wilt Thou Die (1976), A Harder Thing than Triumph (1977), and A Parcel of Their Fortunes (1979).  These four novels center around an Episcopalian high churchman, the Reverend Dr. Simon Bede, and his friend, photographer Nancy Bullock. Byfield also illustrated a handful of works by other authors, and had a half-dozen contributions to Alfred Hitchcock’s Mystery Magazine between 1982 and 1986.

Byfield’s most significant publication relating to the fantasy genre is The Glass Harmonica: A Lexicon of the Fantastical (New York: Macmillan, 1967), which was retitled The Book of Weird when it was republished by Doubleday in 1973.  It is a witty, illustrated compendium of just over one hundred alphabetical entries, on topics ranging from “Advisors” and “Alchemists”, on through “Castles and Palaces” and “Crones and Hags” to “Dragons”, “Dwarves” (spelt like, and similar to, the Tolkienian sort), “Kings”, “Queens”, “Serfs and Peasants”, “Vampires” and finally “Wizards”.  There is a vein of humor to the entries, as in the one for “Mangel-Wurzel” which is defined as “a type of beet which should, like all beets, be used only to feed cattle. It is a crop which seldom fails and is much planted by Serfs and Peasants” (p. 98). And there is a lot of useful information for the deviser of quasi-medieval fantasy worlds, telling of the various landscapes (and what grows on them) as well as nice illustrations for various vessels like flagons, goblets, blackjacks, horns and tankards. It several ways in can be seen as a precursor to Diana Wynne Jones’s The Tough Guide to Fantasyland (1996, revised 2006).

Very little is known of the painter and illustrator Sidney Stanley, the only child of Walter Stanley (b. c. 1858), a clerk at the Board of Trade, and his wife Viola Agatha, née Blenman (b. in Barbados, c. 1858), who were married in Lambeth, London, in the summer of 1889.

Born Sydney Walter Stanley (all official records give his first name as “Sydney”), he signed his art as “Sidney Stanley”, and apparently used the spelling “Sidney” for all non-official purposes. The 1911 UK Census shows the family in Clapham, with Sydney listed as an “art student”. He exhibited with the Royal Academy in 1916 and 1922, and apparently was known for painting landscapes and murals. Here I shall discuss only his  five illustrated books, plus one other compilation in which his art appeared. In his last years he was active in the British Astronomical Association.


His first book he co-illustrated with Gilbert James. It was Edith Holland’s The Story of Buddha (London:  Harrap, [August 1916]).  It contains nine illustrations, five signed by Stanley, three signed by James, with an unsigned frontispiece.  Oddly, James is given first billing despite Stanley having contributed more illustrations. 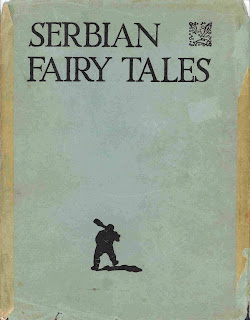 Stanley was one of several illustrators to contribute to Puck Annual 1923 (London: Amalgamated Press, 1922), and his final illustrated books were for a series of pocket-sized classics published by Collins.

The first contains only a frontispiece.  It is Tales Grotesque (London: Collins Clear-Type Press, [March 1931]), by E.A. Poe. 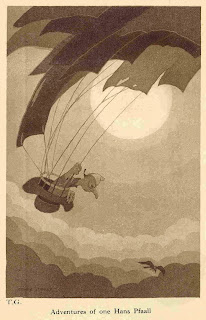 Stanley’s next illustrated book was The Willows and Other Queer Tales (London: Collins Clear-Type Press, [February 1932], by Algernon Blackwood.  It contains five plates by Stanley, illustrating classic stories like “The Willows” (top) and “Ancient Sorceries” (second and third). 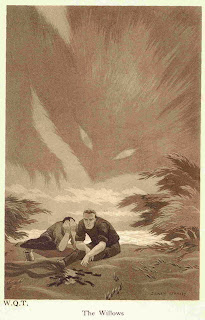 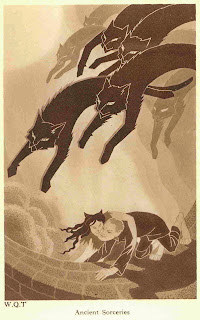 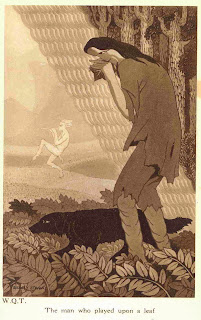 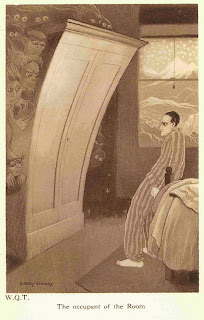 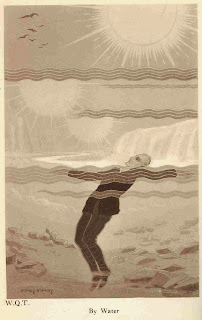 Stanley's final illustrated book was The House with the Green Shutters (London: Collins Clear-Type Press, [March 1933], by George Douglas.  It contains only a frontispiece. 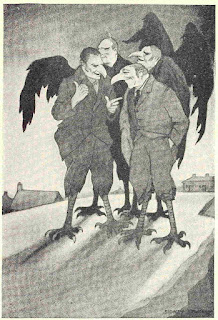 Stanley’s book illustrations deserve much more attention than they have hitherto received.