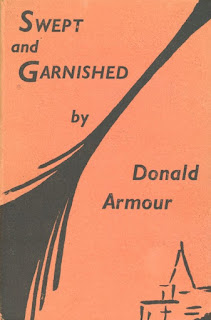 Donald was educated at Ladycross Preparatory School, Seaford, and the Downside School, Somerset. He matriculated at Pembroke College, Cambridge, in October 1926 (B.A. December 1929). He married Mary Consuelo Hutton (1908-2007) in Marylebone, London, on 17 November 1932. They had one son and one daughter.

Armour worked as an advertising copywriter in London through the 1930s, served in the Royal Corps of Signals from 1939-1945, and managed an advertising agency in Cape Town, South Africa, from 1947 through 1959.  From 1960 through 1972, he worked in Alicante, Spain, returning to England and settling in Devonshire from 1972 to 1986, before moving at last to Hindhead, Surrey, two years before his death.

Armour published two novels, the first short and the second much longer. The first, Swept and Garnished (London: Laidlaw Books, [October] 1938), came from a very short-lived publishing firm, who had also planned to publish in 1939 Armour's second novel, So Fast He Ran (London: Chapman and Hall, [May] 1940), but went out of business before doing so, and the book was passed on to another publisher. Both novels are fantastical in nature. 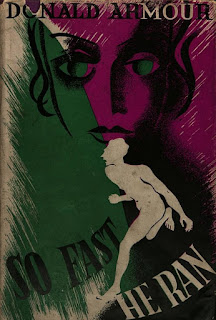 Swept and Garnished has been championed as a lost masterpiece, but that somewhat overstates its value. The simple plot successfully circumscribes the happenings between two clergyman rivals in a small town in the West Country, one a more modern Anglican vicar, the other a more traditional Catholic priest. The devil finds an inroad via the vicar and his family, and it is the Catholic priest who realizes that something truly evil is happening and must work to thwart it.

So Fast He Ran is a considerably more ambitious work. It is a time-slip novel, in which a man in the present escapes danger by successive transportations into similarly fraught situations in the past, first to the time of King Arthur, then to the time of Boudicca, and still further back to a Neolithic time.

These two novels are apparently Armour's only published fiction. It is a pity that Armour turned away from literature.

Posted by Douglas A. Anderson at 3:00 AM No comments: 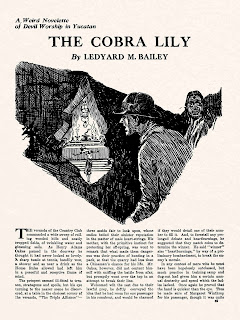 Ledyard M. Bailey contributed one single novelette to Weird Tales, "The Cobra Lily" in the January 1924 issue. Sadly, it is not a very good story, and it is more an adventure romance than a weird tale. It concerns a sacred flower used in serpent worship in the Yucatan, and some members of the cult. The plot is filled with cliches and the story weak and of little interest. Bailey contributed over a dozen stories to magazines in the 1920s, ranging from 1924 through 1928, in titles such as The Blue Book Magazine, Popular Magazine, McClure's and Women's Home Companion. Bailey published no books, and few of his stories have been reprinted.

Ledyard Marlborough Bailey was the son of Nathaniel D. Bailey. He graduated from Western Reserve College in Ohio (now Case Western Reserve), later settling in Utah. Around 1892 he married Anne Austin (1866-1935). They had two daughters, the younger of which died as an infant. He managed the Portland Cement company in Salt Lake City for many years. He also served as executive secretary of the Utah Food and Fuel supply organization during the World War. After his retirement, Bailey moved to southern California. He was visiting his daughter in New Jersey when he died. 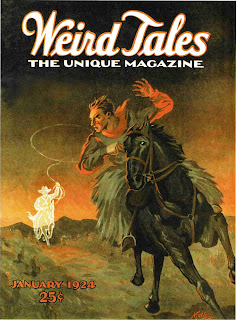