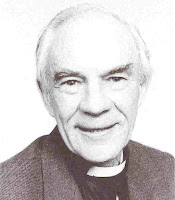 Power grew up in Newcastle-on-Tyne, where his father was vicar in a poverty-stricken parish.  The family moved to Birmingham in 1926. He went to Stanley House School, and then to St. John’s School, Leatherhead. Power studied history at Worcester College, Oxford (B.A. 1938; M.A. 1942), and theology at Ripon Hall, Oxford (B.A. 1940).  He was ordained a priest of the Anglican Church in 1940, and thereafter served in the Birmingham area, settling as the vicar of Ladywood in 1952, a position he held until his retirement in 1988. He was also the canon of Birmingham from 1965. Power married Jean Edwards on 17 April 1944; they one son and three daughters.

Power’s first publications were nonfiction, including The Technique of Hypnosis (1953) and The Forgotten People: A Challenge to a Caring Community (1965), the latter concerning the displacement of the poor and elderly in his district as properties were being destroyed by developers. Power also contributed a weekly column to The Birmingham Evening Mail, beginning in 1953, and wrote articles, stories, and verse (sometimes using the pseudonym Kratos) for various periodicals, including Argosy, Punch, The Observer, The Guardian and The Birmingham Post.  He published a volume of poetry, Ends of Verse (1971), with an introduction by Ruth Pitter, and two short books, In Bereavement–Hope and Son of Man–Son of God, both in 1979.

Power’s fiction grew out of stories he told to his children as bedtime stories.  He wrote three short novels about a north Atlantic island, the home in the fifth century of the kingdoms of Firland and Borea, the latter ruled by the evil magic of Queen Ivis.  In the first book, ten-year-old Richard learns he is the rightful king of the forbidden territory of Firland.  He is aided by the wizard Greylin, who goes forward in time to consult with Sherlock Holmes (with the permission of the publishers of Arthur Conan Doyle’s stories).  The first book was published in paperback (with cover and a map signed Clebak) as The Firland Saga (Kinver: Halmer, 1970), and reissued in a nice hardcover (illustrated by Michael Jackson) as The Forgotten Kingdom (London: Blackie, 1973). The second volume (also illustrated by Jackson) was Fear in Firland (London: Blackie, 1974). The first book was translated by Benedikt Benedikz into Icelandic in 1973, and both were translated into Danish in 1973 and 1974.  A third volume, Firland i Flammer [Firland in Flames] (1974) appeared only in Danish translation; it has never appeared in English.  In 1978, Power wrote:  “I thought, if Tolkien can create a world and Lewis a country, surely I could manage an island! In not too serious a mood, I mixed an element of Tolkien, a sampler of Lewis, a touch of T.H. White (The Sword in the Stone—which I also loved) and a dash of Asterix the Gaul—and plastered them on to a rough Malory background.  Hence Firland!” 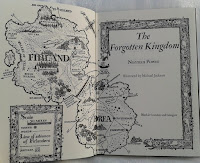 Power’s association with J.R.R. Tolkien began in March 1938 when Tolkien was invited to speak at a meeting of the Lovelace Society at Worcester College.  Power already knew The Hobbit, published some months earlier in September 1937, and he sat at Tolkien’s feet as Tolkien read his then-unpublished fairy-story Farmer Giles of Ham. Years later, just before Tolkien died  in 1973, Power and Tolkien exchanged some letters and books, when Power lived near Tolkien’s boyhood home. After Tolkien’s death  Power wrote a handful of articles about their association, in Library Review, The Tablet, and various Tolkien-related publications.

One further Tolkien association comes via artist Pauline Baynes, who illustrated Tolkien's Farmer Giles of Ham (1949) and The Adventures of Tom Bombadil (1962), among other Tolkien-related projects (in addition to illustrating C.S. Lewis's seven volumes of The Chronicles of Narnia).  Baynes also did an illustration of a scene from the first Firland book which appeared as the cover illustration for the Autumn 1980 issue of Mythlore (whole no. 25).

Posted by Douglas A. Anderson at 6:00 PM