Ruth Sheila Hodgson was the only child of John Stuart Hodgson (1877-1950) and Emily Storr Best (1875-1965), who were married in Bromley, Kent, in the spring of 1915.  Her father was known as Stuart Hodgson, a journalist and author, most-known as the last editor, from 1921-31, of the left-wing newspaper the Daily News.  He wrote a number of books, including The Liberal Policy for Industry (1928); Portraits and Reflections (1929); and The Man Who Made Peace: The Story of Neville Chamberlain (1938).

Sheila (who like her father was known familiarly by her middle name) was educated at Broadstairs, the Brighton and Hove High School, and the Michel Saint-Denis Stage School. During World War II she acted in repertory companies, and began to write plays.  She worked for the BBC as a scriptwriter for about six years in the 1950s, later moving on to ATV.  Her serialized thriller for children, Stranger on the Shore (1961), was well-received and is remembered for its theme music for clarinet by Acker Bilk.   Additionally, she edited and introduced a volume Love Story: Based on ATV’s Top Play Series (1968), and a few of her plays appeared as booklets, Alarm Call (1976) and Tunnel Vision (1995).

Hodgson was a prolific writer of radio dramas for over four decades. Her first radio play was “Night without Sleep”, broadcast in the “Saturday Night Theatre” on 6 June 1959. In the 1970s she was working freelance out of Brighton. She sometimes adapted stories by other writers, including five by Algernon Blackwood, four of these utilizing Blackwood’s psychic detective John Silence, all first broadcast on BBC Radio 4. These include “The Camp of the Dog” (broadcast 28 August 1974); “The Nemesis of Fire” (18 December 1974); “Secret Worship” (19 March 1975); and “The Empty Sleeve” (2 October 1975).  The fifth Blackwood adaptation was “The Human Chord” (10 December 1985). She was also known for her own thrillers, including her first full-length play, “The Long Drive Home” (1967), and “Inter City Incident” (1975), “This Line is Now Closed” (1978), and “Sea Fever” (1989). 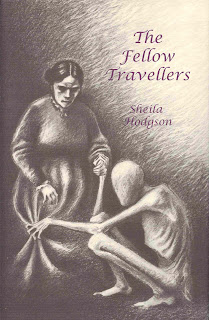 Hodgson’s twelve ghost stories (eight of which were based on her radio plays) were collected in The Fellow Travellers and Other Ghost Stories (Ashcroft, British Columbia: Ash-Tree Press, 1998), with a new introduction by the author but oddly not including Hodgson’s essay on “The Ghost of M.R. James”. (One further uncollected story is known, “Slip Stream”, which appeared in the June 1972 issue of London Mystery Selection, presumably excluded from the collection because it is not a ghost story.)

In early 1970 (not 1971 as is sometimes reported), Hodgson had married David Roderick Middleton (1923-2003), a travel journalist, in Hampstead in Greater London.  Eventually they settled in Wiltshire, about three miles from Stonehenge. They had no children, and in their last few years they were institutionalized and unable to care for themselves. Sheila had a stroke about six weeks before she passed away on Christmas Day 2001, three days after her eightieth birthday. Her husband passed away nine months later.

Update 11/30/19: A correspondent has told me that Hodgson acted in a Christmas day 1951 broadcast of a one-hour BBC live studio presentation of The Princess and the Swineherd, a dramatization by Nicholas Stuart Gray of the story by Hans Christian Andersen.  Sadly no copies of it seem to survive.
Posted by Douglas A. Anderson at 6:00 AM