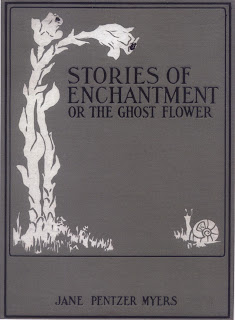 Jane Pentzer Myers published only one book, a collection of twelve children’s fantasies, Stories of Enchantment (Chicago: A.C. McClurg & Co., 1901), illustrated by Harriet Roosevelt Richards.  Several of the stories contain Native American elements, like “The Ghost Flower” and “The Corn Fairy”, and thus may be placed alongside similar works of the same time-period like Zauberlinda the Wise Witch (1901) by Eva Katharine Gibson and some of the stories by L. Frank Baum. Myers's narratives are skillful—one is surprised that this is her only book.

Very little is known of the author. She was born Jane Pentzer Hamlin in southeastern Wisconsin in September 1847; her father, Alanson Hamlin (1815/20-c.1855), was from Connecticut, her mother, Elizabeth J. Bassett (1824-after 1860), from England. She was the third child of five or six, having two older brothers, one younger sister and one younger brother. By 1860 she and her siblings were living with a family surnamed Kent—presumably relations (possibly the Elizabeth J. Kent listed is their remarried mother)—near Oran, in Fayette County in northeastern Iowa.  On 3 July 1866, in Fairbanks, Iowa (in Buchanan County, the next county to the south of Fayette), she married William D. Myers (1846-1921), and they settled in Humboldt County, in the northern central part of Iowa—first in Livermore, and then in Springvale (which was later renamed Humboldt). In 1880 they were running a restaurant, but by 1900 William was working as a general agent for machinery, and in 1910 he gave his occupation as gardener. They had four children, three sons and one daughter.  According to the 1920 Census, enumerated on January 19th, they were living in Oswego, in Labette County in southeastern Kansas, joined by one of their widowed sons, William E. Myers.