Charles Louis Layng appears in the 1900, 1910, and 1920 U.S. Censuses with his surname given as “Lang”. In all three instances he is listed as living with his aunt and uncle, Louis and Martha Flugel, with his parentage given as Irish (matching that of his aunt Martha Flugel).  His service record for World War I, which gives his last name as Layng, also notes that his was given an honorable discharge on 28 February 1918, with a Surgeon’s Certificate of Disability, judging him as one-hundred percent disabled. By the time of the 1920 Census, he was working as a stenographer for a railroad company. Soon after this he married Margaret Burgoyne (1893-1972), who was also from , and the couple moved to .

Layng worked as a cub reporter on the Chicago Daily News for a few years before taking on a much higher paying job as the editor of a prosperous trade journal.  His first three books appeared from a publisher at the beginning of the craze for crossword puzzle books, Layng's Cross-Word Puzzles: First Book (1924); Layng’s Junior Cross-Word Puzzles: First Junior Book (1924); and Layng’s Cross-Word Puzzles: Second Book (1925).  He and his wife regularly traveled to , and for much of the 1930s he contributed to various magazines, including pulps like Real Detective Tales and Mystery Stories, Blue Book, Top-Notch, and Railroad Stories, as well as slicks like Redbook. His third book The Monarch Who Wouldn’t Go Mad (1934), a biography of Emperor Franz Joseph of Austria (1830-1916), appeared from another Chicago publisher, Reilly & Lee, after which time his luck with publishers seems to have run out.

During the late 1930s and 1940s, Layng worked as a foreign correspondent.  While reporting from and , Layng began a mystery novel, Murder in Munich, which was bought by Doubleday after they saw the first six chapters.  Layng sent them the rest, and heard nothing further.  Returning after the war, he discovered that the man who had bought it had left the firm, and that other editors had decided it was not salable in the because Americans wouldn’t buy whodunits set in foreign lands. 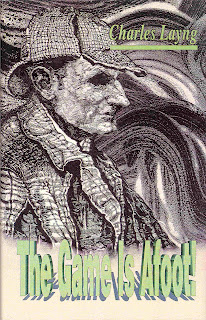 After WW II he become involved with the Baker Street Irregulars, a society devoted to the fictional detective Sherlock Holmes.  After submitting an essay to the Baker Street Journal, edited by Edgar W. Smith, Layng was encouraged to write a book of such essays, examining many anomalies in the Sherlock Holmes canon. Smith said he knew a publisher who would be interested in such a book.  But when, some years later, Layng had finished the book, Layng learned that Smith had died, so the project languished. In 1964 Layng sent a copy of the typescript, titled The Game Is Afoot!, to Peter Ruber, who was then corresponding with Layng about his friendship with the bookman Vincent Starrett, about whom Ruber was writing a biography. Three decades later Ruber found the typescript in his files, and it was published in 1995 by George Vanderburgh under the imprint of the Metropolitan Toronto Reference Library.

Posted by Douglas A. Anderson at 9:00 AM