Lyllian Brantley Huntley was an only child whose parents divorced when she was young.  She was raised by her mother, Mattie May (Pringle) Huntley.  On December 5, 1905, in Macon, Georgia, Lyllian married John Joseph Harris (1881-1951), a lawyer (and after 1933, a judge). They settled in Sandersville, where both had grown up. They had no children. Lyllian Huntley Harris was a member of the United Daughters of the Confederacy and Southern States, and lived most of her life in central Georgia. 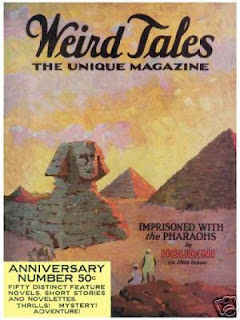 Harris had only one significant publication, the short story "The Vow on Halloween" which appeared in the May-July 1924 issue of Weird Tales, the last of the large bedsheet style format. With the title spelled slightly differently (as "The Vow on Hallowe'en") the story was fraudulantly attributed to noted Irish writer Dorothy Macardle (1889-1955) by Peter Haining and included in his anthology Hallowe'en Hauntings (London:  William Kimber, 1984).  Haining even claimed the story had appeared in a 1922 issue of Eire, where it did not.  This is a typical example of the brazen fraud that Haining engaged in while putting together his many anthologies; the scope of this fraud has only become apparent in recent years.  "The Vow on Halloween" is being reprinted with its correct author name in Paula Guran's anthology Halloween, to be published by Prime Books in late September 2011. **UPDATE, see comments below: in the end this story was not included in Paula Guran's anthology.**
Posted by Douglas A. Anderson at 7:00 PM