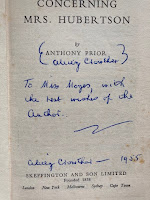 "Anthony Prior" published two novels. The name has been suspected of being a pseudonym, and the discovery of an inscribed copy revealing the author's real name as Alicey Crowther has confirmed this. 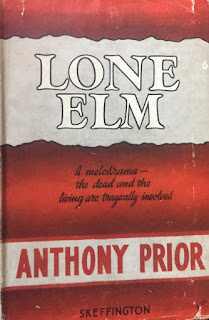 Little is known about Alice. In the 1901 Census she is described as a typewriter's apprentice, and in the 1911 Census as a typist for a Status Enquiry Agency.   In the 1939 England and Wales National Register she is listed as a "Novelist -- partially incapacitated" whatever that may mean.

Her first novel as Anthony Prior was not published until 1946, so with the 1939 description as a novelist, we can wonder whether she published any previous books under a different name (there are none under her real name). The first novel is Lone Elm (Skeffington, [1946]). It is a occult melodrama to do with interactions between the dead and the living. The dead prey upon the living, often on their own relatives, and a doctor works at a house called Lone Elm where he and others treat such cases of "astralitis" by dislodging and interrogating the spirits, and then exorcising them.

The second novel, Concerning Mrs. Hubertson (Skeffington, 1951) is non-fantastic, covering the struggles of a starving maid who is preyed upon by a renowned artist. 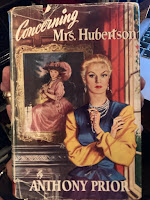 *Thanks to David Tibet for help with this entry.

Posted by Douglas A. Anderson at 4:00 AM

Email ThisBlogThis!Share to TwitterShare to FacebookShare to Pinterest
Labels: CROWTHER Alice, PRIOR Anthony