Ronald S.L. Harding was the author of some ten ephemeral lowbrow thrillers, which were published primarily for the popular fiction vendors and the lending library market beginning in the mid 1930s, and which are more renowned today for their scarcity than for any literary qualities.  At birth his name was apparently registered as Vivian Stanley Lowne Harding, but by the time of his baptism some six weeks later, his full name was recorded as Ronald Stanley Lowne Harding.  He was the son of Stanley James Harding (b. 1878), a technical journalist, and Emily Blanch Jenoyz Lowne (b. 1870), the daughter of Robert Mann Lowne (c. 1845-1929), an inventor and manufacturer of scientific instruments.  Ronald had a sister Catherine Blanche Harding, three years younger than himself. 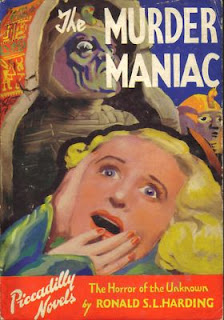 Little is known of his life, but his family seems to have been active in scientific and artistic circles, particularly with regard to music.  His first book was The Demon of Hong Kong (London: F.M. Mowl, 1934), followed by “One Dreadful Night—”: A Tale of the Unknown (London: Modern Publishing Company, [1935]).  His next four books were published by Fiction House of London, as part of their numbered Piccadilly Novels series:  The Murder Maniac (no. 36, c. 1935); The Black Bottle (no. 56, c. 1935); Strange Fate (no. 71, 1937); and Castle of Fear (no. 91, 1938).  The Murder Maniac is a rationalized supernatural horror story concerning a mad Egyptian’s attempts to mummify archeologists and to sacrifice the heroine in a pyre of engine oil in an English country house.

His seventh novel was The Library of Death: A Tale of Mystery (London: Modern Publishing Company, [1938]), a dreary and forgettable work. Over half of the book is mere romance, as John Tarren, secretary to the lecherous Sir Charles Dorsay, is in love with Dorsay’s step-daughter and ward, Elsie Mervyn.  After their affair is discovered, much to the wrath of Sir Charles, who wants to marry Elsie himself, there is a quarrel after which Sir Charles is found murdered, his face obliterated by a shotgun.  A dithering inspector rounds up and interviews possible suspects, in the meantime learning of a supposed family curse whereby for the last several generations the male Dorsays have had stakes driven through their hearts shortly after death, in order to prevent them from rising as vampires.  In the end Sir Charles is discovered to have faked his own death, and he was planning to disappear to avoid bankruptcy after having squandered his family fortune. Some of the scenes are played for melodrama and thrills, but the characters are one-dimensional and clichéd, and their actions contrived and implausible.

In an entry in a writers’ directory, Harding listed among his output three further novels, published by Phoenix Press. They are not listed in The British Museum Catalogue of Printed Books.  Their titles are The Grimpton Bride [1944]; The Blue Light [1945];  and Dream of Love [date unknown].  No copies are known to exist in libraries.

Harding also noted that he was a contributor to The Stage, and to the British Engineers Export Journal, and that he was the librettist and composer of a five-act grand opera Frankenstein, based on Mary Shelley’s story. The original manuscript, dating from the 1920s, was lost when his home was damaged by a bomb during the Blitz, but he re-composed it over a five year period and saw it performed once by his friends.

Harding married Dilys Hughes (1901-1985) in Dolgelly, Merionethshire, in the spring of 1927.  Harding died in Sydenham; his widow outlived him by twenty-five years, and died  in north .

N.B.: I am grateful to Andrew Parry for sharing with me information on Harding, including the notes on the plot and the cover scan of The Murder Maniac.
Posted by Douglas A. Anderson at 9:00 AM