Howard Rose was the oldest of two surviving sons of Sam Rose (c.1897-?), a restaurant manager and owner, and his wife Etta Donchin Rose (c.1898-1952), both of Russian Jewish descent.

Rose served in the army in World War II, and studied painting and art history for four years at the Art Institute in Chicago. He moved to New York in 1950, where he made a career working in the art galleries. With his partner Raymond Saroff (b. 1922), he began to collect art in the late 1950s, developing a particular interest in folk art.  Saroff described their collecting in 1989: "Over a period of twenty-five years our collection came to include more than 300 items. The variety was enormous—sculptures and paintings, of course, but also furniture, rugs, quilts, drawings, toys, theorems, tramp art, etc.—most of it from the 19th and early 20th centuries."

In New York Rose also began to write fiction.  He published only one novel during his lifetime, that being Twelve Ravens: A Novel of Witchcraft (New York: Macmillan, [February] 1969). It was well-reviewed. Kirkus Review described the book as "a starling, stygian tale of a witches' coven in the midwestern hills, vaulting out of the dark venue of Poe with something of the manic, picaresque energy of Pynchon." The story centers on a Jewish family, Max and Rose Lavin and son Alan. Their handyman, called Gypsy, is a magus and the leader of the rural town of Braddox, southwest of Chicago. Its modernist take on the occult was perhaps a bit too early to be appreciated. Rose wrote several more novels before his sudden death.

From 1979 to 1982 Rose wrote a book on Unexpected Eloquence: The Art in American Folk Art.  The first chapter appeared in Art in America for January 1982, but the full book did not appear until 1990, three years after Rose's death, when it was published by Raymond Saroff in association with the Edith C. Blum Art Institute at Bard College, Annandale-on-Hudson, where there was an exhibition of selections from the Howard Rose / Raymond Saroff Collection of American Folk Art from December 1989 through March 1990.

Saroff also reprinted Twelve Ravens in 1990, and published for the first time three other Howard Rose novels, The False Messiah trilogy, comprising The Pooles of Pismo Bay (1990), a Great Depression sage concerning the Wobbly sensibilities in the Poole family; Oak Street Beach (1990), a short novel concerning Reuben Poole, set fifteen years after The Pooles of Pismo Bay; and The Marrano (1992), the third in the sequence though it overlaps in time with Oak Street Beach. None of these have the overt occult presence found in Twelve Ravens.

Posted by Douglas A. Anderson at 6:00 AM No comments: 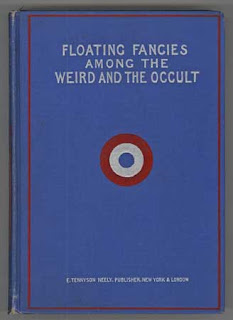 Clara H. Holmes moved to Cripple Creek, Colorado, in the summer of 1892. She contributed to Midland Monthly beginning in 1896. Other articles include "The Ice Cave, Cripple Creek, Colorado," in the September 1897 issue of Travel. Various stories published in newspapers up to around 1910 include "Uncle Eben's Mistake,""It Only Came After He Recovered from His Bashfulness," and "Trifling Telephone Tangles." But her most significant publication was a volume of eleven short stories, Floating Fancies among the Weird and the Occult (New York: F. Tennyson Neely, 1898). The author's name is misprinted as "Howard" on the spine, but is correct on the title and copyright pages.  The eleven short stories are amateurishly written, but some of the content is still interesting, as in the first story, "Nordhung Nordjansen," a hollow-earth tale, where a sailor finds himself in this dimly-lit world of mist beings in human form. In "A Nineteenth Century Ghost" a woman is haunted by the ghost of the woman who took her husband away from her. "A Tale of the X-Ray" tells of a man who experiments with X-rays, resulting in a physiological change.

Clara H. Holmes moved to Colorado Springs perhaps as early as 1908. In 1926 Holmes published a second book, a collection of verse entitled Scattered Autumn Leaves. She died the next year at the age of 89.

*Thanks to Steven Rowe for contributing updates to this entry.
Posted by Douglas A. Anderson at 6:00 AM No comments: